Wines that break with tradition

The Gaja family has been growing wine in Barbaresco since 1859. The current owner Angelo Gaja took over the estate in 1961 by his father. He immediately began to put his ideas into practice and planted the southern exposure below the house completely with Cabernet Sauvignon. His father at that time commented on this with "Darmagi", which means "What a pity", as he had the entire mountain dedicated to Barbaresco replanted for it. Time, however, proved Angelo right and, remembering this event, he named the resulting red wine Darmagi.

The naming of the wines according to events or localities is a tradition at Gaja, there is the Sperrs series, Piedmontese for "longing". These wines come from a 12 hectare site in Serralunga, which fulfilled the family's longing for a Barolo site of their own.

Barbaresco is still the flagship of the Gajas, and the family owns 14 vineyards that produce the grapes for this wine. The high consistency and quality of these wines show that the family has proven that they have the right nose here, laying the foundations for their current success. In 1964 the first individual vineyards for Barolo were planted:

Furthermore, one can derive the characteristics of the vineyard from the names. Sorì stands for a southern exposure, while Costa denotes a steep slope. While it was already able to bottle the first San Lorenzo in 1967, it took until 1970, when the first Tildìn followed, and 8 years (1970-78) for Costa Russi. 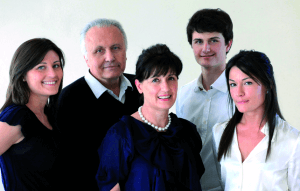 Time for something new

If you think this is where the history of Gaia ends, you are mistaken. In 1983 Angelo broke with conventions again and was the first to plant Sauvignon Blanc in Barbaresco and Serralunga. The existence as a wallflower among the many massive red wines from Piedmont, which covers 54800 hectares of vineyards, is reflected in the name. The Alteni di Brassica Sauvignon Blanc gets its name from alteni - the old stone walls around the vineyards, as well as brassica, a small yellow flower from the cabbage family.

After all these innovations, in 2010, at the age of 70, he placed the daily business in the hands of his daughters Gaia and Rossana, who now run the winery. Even though he is no longer managing director, he is keen to point out that he is not retired. His daughters already created their own Sauvignon Blanc called Gaia & Rey Rossj-Blanc, which is the "little brother" of Alteni di Brassica.