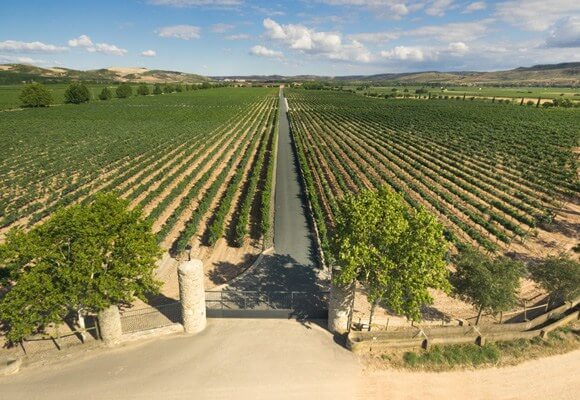 The history of the Baron de Ley winery dates back to the 16th century in Spain's prestigious Rioja region. At that time the fortress Imas was built as a massive castle and finally, in the course of a barter, the Benedictine monks exchanged it for the castle of Monjardín. The entire lands of Imas, on which today the wines of Baron de Ley originate, went through an eventful history in the following centuries and finally came into the possession of Baron de Ley together with the monastery in 1985.

Thus, Barón de Ley combines modernity and history in an excellent way. The approximately 90 hectares of the still quite young winery are located around the old Imas monastery and new buildings, which are striking for their modern and well thought-out architecture.

They are all hand picked to give each grape the maximum care. For vinification, Baron de Ley has a whole range of stainless steel tanks, but also large oak fermentation tanks, which can hold between 100 and 140 hectoliters, and in which the winery's oenologists like to experiment with different styles.

After fermentation, Baron de Ley puts all Rioja wines, without exception, into barriques. The winery can draw on a proud total of 15,000 barriques, of which 3,000 are made from French oak. Baron de Ley does not stop there either. The great Crianza, Reserva and Gran Reserva wines mature for at least 18 months in the bottle and harmonize in the cellars to perfection.