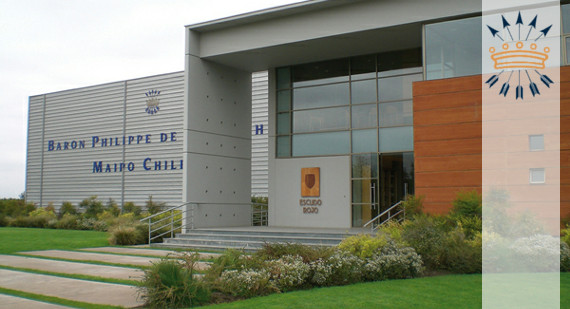 The country on the south-west coast of America has some of the world's greatest wine-growing regions. On the high-altitude alluvial soils between the mountains and the Pacific Ocean, the grapes benefit from hot summer days and cool nights, with the constant influence of the fresh ocean also having a positive effect.

Baroness Philippine de Rothschild entered into a partnership with Concha y Toro, one of Chile's largest wine producers, in 1997. The aim was to create an exceptional Franco-Chilean wine. The first vintage Almaviva 1998 was a great international success. Although Almaviva has a Latin American appeal, the name originates from French literature. Almaviva was the hero from Figaro's wedding.

Baron Rothschild - the name of an old banker dynasty

The red symbols on the wine label pay homage to Chile's indigenous culture and history. Almaviva is thus the result of a meeting of two cultures and is described as an elegant and complex wine. It is a cuvée made from several typical Bordeauxt grape varieties of Cabernet Sauvignon.

Another brand wine from Baron Philippe de Rothschild Maipo Chile is the Escudo Rojo, first released in 1999. The name "Escudo Rojo" refers of course to red (h)shield, whose coat of arms colors blue and yellow were reflected in the label.