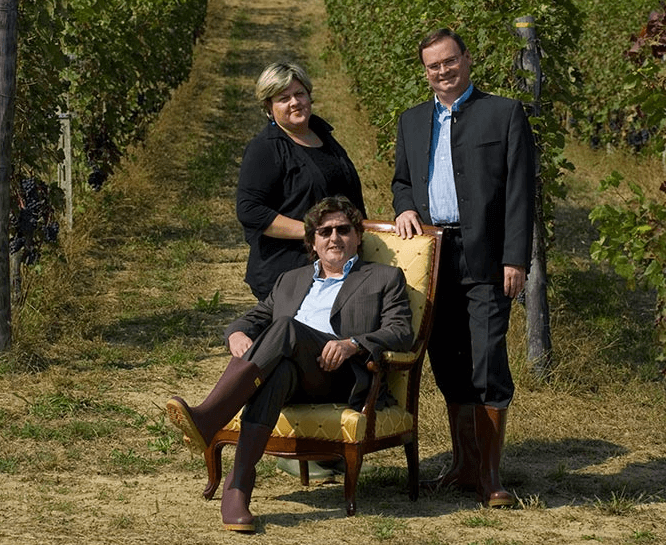 It all began with the great-grandfather Giuseppe Bologna and his nickname "Braida", which he received at markets and church festivals through the play of the "Pallone elastico", a typical Piedmont ball game, similar to the fistball.
His son Giacomo Bologna inherited from him the nickname, the vineyards, but above all an unlimited love for the terroir and its wine. On September 1st, 1961 the winery "Braida di Giacomo Bologna" was founded, Giacomo dared to go new ways, was the first to put the wines of the grape variety Barbera for maturation in French barriques, which at that time in Italy almost amounted to a revolution and today is very widespread. His intuition proved him right, he was producing wines that today belong to the flagships of Piedmont and the Italian wine scene.
The undisputed ambassador of the estate is the "Bricco dell'Uccellone", first introduced in 1982, a unique cru and the first Barbera to be aged in barriques.

To this day the winery follows the philosophy and life vision of Giacomo and Anna Bologna, the close relationship to wine, the region, the terroir and friends.
In the meantime it is the third generation, the siblings Raffaella and Giuseppe Bologna, both oenologists, who continue their journey with unbelievable love, joie de vivre and devotion and help the Barbera to fame and attention with their extraordinary and award-winning wines, through quality and value, which otherwise seem to be reserved only for grape varieties with more international reputation. They are also supported by Raffaella's husband Norbert Reinisch, Austrian doctor, WSET sommelier and responsible for distribution in foreign markets.
Raffaella is a member of "Donne del Vino", the national women association of Italian female wine-growers, winemakers, restaurateurs and wine journalists.