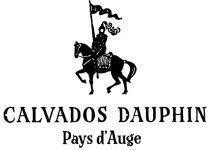 Calvados is both, a department in Normandy and the name of a traditional apple brandy that comes from this department. The name "Calvados" originates from a frigate of the Spanish Armada, which crashed on the Normandy cliffs on its way to the great naval battle against England - it was called "Calvador".

Normandy on the Atlantic coast, in the far north of France, is the epitome of a harsh, rugged and pristine landscape whose beauty consists of craggy cliffs, salty breeze and a quite hardened human race. The production of an apple brandy from cydre is documented since 1553 thanks to a royal concession to Sire Gilles de Gouberville from Le Mesnil-au-Val.

Calvados Dauphin comes from the Pays d' Auge, a paradise in the heart of Normandy. This is where the apples grow, varieties approved for the production of Calvados, from which the apple must is produced and the apple brandy distilled. Only the barrel ageing of two to six years or longer leads to the Calvados.
This is what nature wants and this is what the French law says: only Calvados, whose apples come from this narrowly defined region and which is fired there, can bear the coveted name "Appelation Calvados Pays d' Auge Contrôlée" - like Calvados Dauphin.

The Calvados Dauphin as Fine, V. S. O. P. and as Hors d'Age Tres Vielles belong to the finest of what this speciality has to offer.