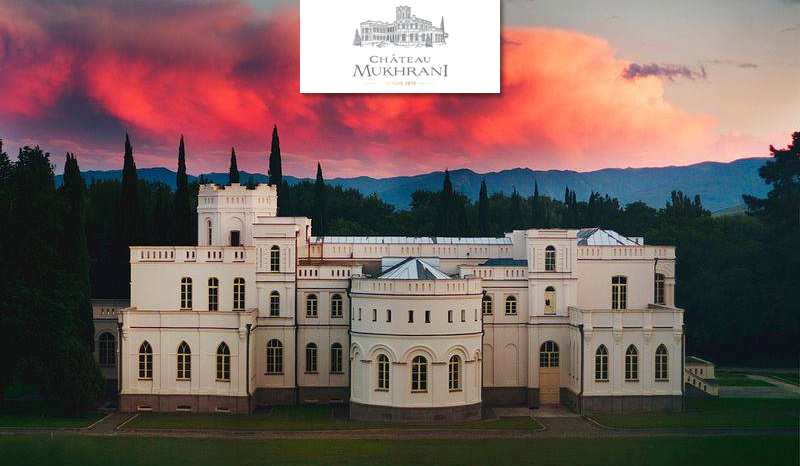 Wine-growing in Georgia has a long tradition stretching back over 7000 years and is thus one of the countries of origin of wine-growing. One of the reasons for this is that the country has very favourable geological and climatic conditions. In addition to a great variety of traditional native grape varieties (which at first glance seem unspeakable): Dswelschwari Obtschuri, Katschitschi, Rkaziteli, Saperawi or Ussatscheluri are also grown in international standard varieties such as Chardonnay, Riesling, Cabernet Sauvignon, Malbec, Merlot or Pinot Noir in order to remain competitive outside Georgia. Traditionally, the red and white wines are maceration fermented and aged in clay amphoras. This gives the wine a very tannic and extraordinary taste. Traditional winemaking in Amphorae (Quevri) was even included in the representative list of mankind's intangible cultural heritage in 2013.

In 1812 Ivane Mukhranbatoni was born in the family of the famous general Konstantine Mukhranbatoni. The young Ivane decided to pursue a military career and became Major General in 1850. At the age of 42, he was appointed military governor of West Georgia. As head of the kingdom of Tbilisi, Ivane Mukhranbatoni fought for years for the eradication of illiteracy in Georgia.

The prince's interest in agriculture was heightened by his trip to France in 1875, where he learned about the fine art of winemaking in the Bordeaux and Champagne regions. After returning home, he decided to produce wonderful Georgian wines on the estate of his ancestors in Mukhrani. So he created a magnificent vineyard and built a winery with a capacity of 1,200,000 litres. The great reputation of Mukhrani wines made the Georgian vineyards famous. Despite a relatively high price, the demand for Mukhrani wines grew steadily and was successfully marketed in St. Petersburg, Moscow, Warsaw, Paris, Vienna and even in cities all the way to the USA.

From the first harvest on, Ivane Mukhranbatoni's wines received a wide international recognition. Mukhranbatoni was one of the exclusive suppliers of wines for the Russian imperial court. Ivane Mukhranbatoni was the first to prove that Georgian wines have their rightful place among the great wines of the world. By blending native and imported grape varieties, he has produced first-class wines whose high quality meets the strictest demands of experts and the refined taste of true wine lovers.

The winery was completely taken into operation in 1876 and produced twelve special wines. Since then, Mukhrani wines have been awarded prizes at international exhibitions and wine tastings that compete with the best wines in the world. The Mukhrani sparkling wine was of such high quality that it was awarded first prize at the 1889 Paris Wine Exhibition.

In 2002, a group of businessmen laid the foundation stone for the restoration of the project Château Mukhrani. The Group intended to revive the estate to its former splendour and resume production in Mukhrani, combining modern and traditional technologies.

In 2007 Château Mukhrani starts building a modern winery with the latest technology. The company now produces its own wine from grapes harvested in its own vineyards. These vineyards are the key to making wine exquisite and truly unique. The wine cellars are located right next to the vineyards and the grapes take a maximum of 15 minutes to reach the processing plant.