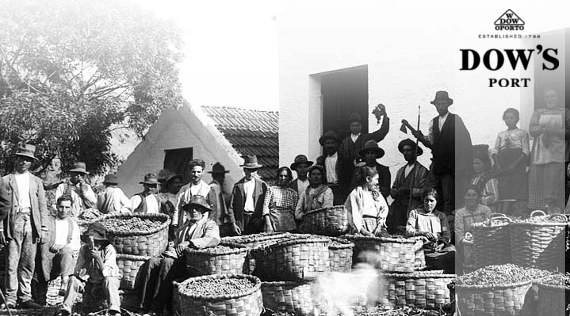 In addition to Antinori, Vega Sicilia, Torres, Müller-Schwarzhof, Perrin & Fils, Baron Phillipe de Rothschild and Hugel, Dow's Port also belong to the narrow circle of Primum Familiae Vini. It is not easy to obtain the quality of belonging to this narrow circle of sizes of the wine nobility. The requirements are as follows: The winery must be family-owned, must be one of the leading wineries in its region and have an outstanding international reputation.

The story of Dow's Port began in 1789 when Bruno da Silva travelled to London to distribute his Douro wines. When he arrived he married an Englishwoman and climbed the social pyramid, which helped to sell his wines. During the Napoleonic Wars, Silva was the only wine merchant who was allowed to equip his merchant ships with weapons, which gave him various starting advantages on the English market. In 1877 the then Silva & Cosens named company merged with James Ramsay Dow. Until now, this has been the name giver of the tradition-rich company for port wines.

The Symington family and wine

The first contact between the Symington family and the port wine company Dow's came about at the end of the 19th century when he worked for the Warre family in Portugal. It was acquired by Dow's at the beginning of the 20th century. When the grande monsieur of Warre & Co, George A. Warre, wanted to retire in London, James Symington took over the management of Dow's. No less later, Symington took over almost a third of the company, and another half-century later, the Symington family took over all of Dow's shares.