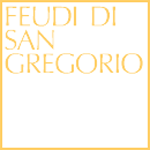 On the edge of the Appenines in the Campania region, you will find an open-hearted, modern winery - the Feudi di San Gregorio. The centre of the 300 hectares of cultivation area is Sorbo Serbicowo also the winery is located. It was newly opened in 2004 in a modern design made by Hikaru Mori, the interior design is from Vignelli and stands for the best Italian design. Both are also responsible for label design. Large areas of the winery are underground, so that the building fits perfectly into the landscape from the outside. Southern Italians are known for their hospitality and the winery Feudi di San Gregorio offers guided tours through the vineyard and the wine cellar.

As a so-called inland winery, the surrounding mountains reach an astonishing height of 750 m, so that the winters are short, but quite cold and snowy for southern Italian conditions, which gives the grapes such a special taste structure. Selected care is given to the root system of the vines, for which the soil of volcanic origin and sedimentary rock appears to be very fertile. This prompted the inventors to create a public park in which a wide variety of plants and trees are at home and the typical flavours of southern Italy are cultivated.