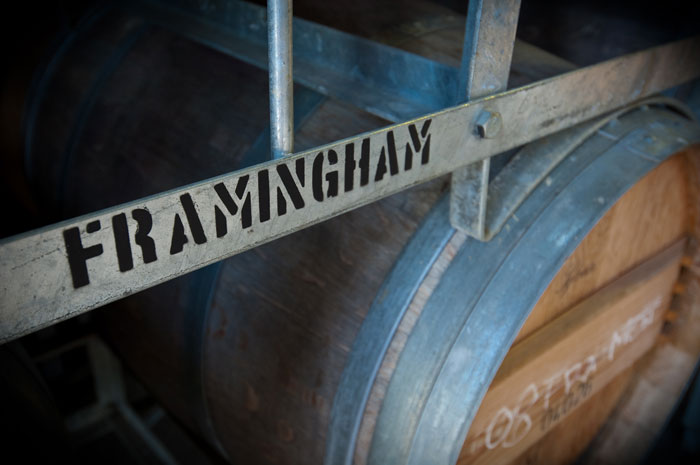 The Framingham Winery is located on the northeastern tip of the South Island in the Marlborough region, one of the country's most important wine-growing regions. The relatively cool, dry climate is a good condition for viticulture. This was recognized by Rex Brooke-Taylor, an engineer from Wellington, who founded the estate's original vineyards. He named the Framingham vineyards after the home town of his ancestors in England. Already in 1981, the first Riesling plants were cultivated in the vineyard in the Wairau Valley. Today they are one of the oldest vines in the Marlborough region.

The first wine called Framingham, a Riesling, was introduced to the wine market in 1994. Three years later, today's winery and tasting room were built. In 2002, a production hall was built specifically for the production of red wines and a hall in which the oak and stainless steel barrels are stored for the ageing of the wines.

On the warm, stony soils of the Wairau Valley, the winegrower of the house, James Bowskill, besides Riesling, Sauvignon Blanc and Pinot Noir, also cultivates Chardonnay, Pinot Gris, Gewürztraminer and Montepulciano. Following Framingham's maxim, it has as little influence as possible on the natural growth of the vines. This means laborious manual labour, the renunciation of artificial fertilizers and the planting to preserve the biodiversity of the vineyard.

Dr Andrew Hedley, an Englishman by birth, is responsible for the development of the wines. He has seen more than 13 vintages in Marlborough. He is supported by his assistant Andrew Brown. Brownie', as this one is affectionately called on the estate, has been working for Framingham since 2009.

In addition to striving to produce creative and exclusive wines, Framingham is committed to respecting the environment. In 2009, it was recognized by Sustainable Winegrowing New Zealand as a sustainable company. Furthermore, the wines from Framingham are organically certified by BioGro NZ Ltd.