The Spaniard Jean Leon, whose civil name is Ángel Ceferino Carrión Madrazo, has an incredible life story to tell. Starting with the death of his father and brother in the Second World War, his flight to France, his voyage across the Atlantic to America, his change of name to Jean Leon, his American life and back to Spain.

To tell all this in detail would take days - if not weeks - to cover the story of Jean Leon in its entirety.

Besides the love of food, Jean Leon has a second great passion - wine. In 1962 he bought 150 hectares of land in Penedès. To the great surprise of the local winegrowers, Jean Leon did not choose the local varieties, but French varieties:

He also built the winery so that it looked like a chateau in Bordeaux. In 1963 the winery opened and Jean Leon planted the first Chardonnay grapes in the Vinya Gigi vineyard. This was followed by the planting of Vinya La Havre, Vinya La Scala and Vinya Palau.

In 1994 his cancer became known and many businessmen were interested in buying the estate. But Jean Leon decided to hand over his legacy to the Torres family. Because he was sure that Torres would continue the unique personality of the winery and the identity of the wines according to his wishes. 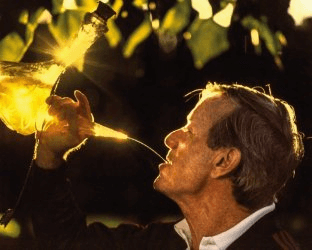 Jean Leon has set milestones in Spanish winemaking: he was the first in Spain to develop a Chardonnay in cask and the first to introduce a Cabernet Sauvignon to the Spanish market.
Today all wines carry the personality of Jean Leon. The 3055 line recalls his time in America when he was a taxi driver - his taxi number plate number was 3055.
The other wines bear the names of the vineyards he planted himself in the early 60s.