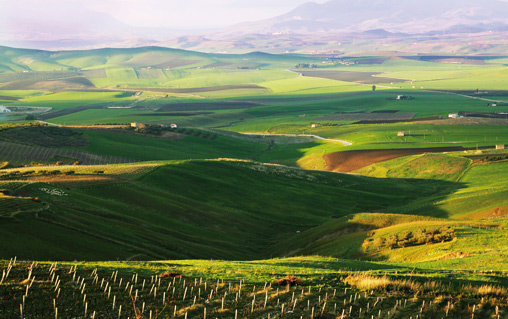 Sicily, home of Palazzo Malgara, is the largest and most densely populated island in the Mediterranean. It is separated from Italy by the Strait of Messina. The winds coming over from Africa turn the south side of the island into a barren, cactus and lean scrub. Half of the southern vineyards have to be irrigated because of the almost continuous drought in the period from June to September. They form green dots in the landscape. In the north and east of the island the climate is somewhat cooler and also more humid. Nevertheless, the sunshine is enough to let the grapes ripen slowly and evenly. Palazzo Malgara is situated in the middle of the hills of Menfi, in one of the most important Sicilian wine-growing regions.

Palazzo Malgara owes its success to two renowned oenologists. In 1990, these people started thinking that they were producing wine in the southernmost wine-growing regions of Puglia and Sicily. This is to be produced from native grape varieties and to accurately reflect the characteristics and expression of the areas in which they are cultivated. The result are wines - modern, elegant and powerful - that express the diversity, power and climate of the South. In the meantime, the Italian wine experts of Palazzo Malgara have taken some reinforcement from South Tyrol. The two new entrants not only support the project, they are also continuing it. Grillo, Inzolia and Catarratto are the white grape varieties whose cultivation and development they have dedicated themselves to. With their knowledge and techniques they have brought the wines to an international level.