Dynamic and young winery in the Loire Valley

The Domaine Pascal Jolivet is one of the youngest and most dynamic wineries in the entire Loire Valley. Pascal Jolivet started in 1982 with the Grands Vins du Val de Loire, before founding the Pascal Jolivet estate, which covers eight hectares, in the communes of Tracy and Les Loges, just five years later, in 1987. Today, the total area under vines covers only 28 hectares in the Pouilly Fumé and Sancerre appellations, plus around 50% of the grapes purchased. His vineyards are limited to the two grape varieties Sauvignon Blanc and Pinot Noir.

Staying true to the philosophy

True to his philosophy of having as little influence as possible, Pascal Jolivet ferments most of his wines spontaneously (without the addition of pure yeasts). Pascal Jolivet vinifies his Loire wines, typical of the region and the terroir, in different lines, such as the Sélections Parcellaires in Sancerre and Pouilly. This includes the four-hectare site Loge aux Moines. This oldest vineyard parcel in Pouilly Fumé was created in the 11th century by the Benedictine monks who gave it its name. 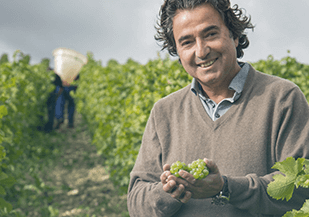 Pascal Jolivet has arrived internationally. He is considered one of the top representatives of Sancerre and Pouilly Fumé, which can be found on the wine lists of Michelin star restaurants.