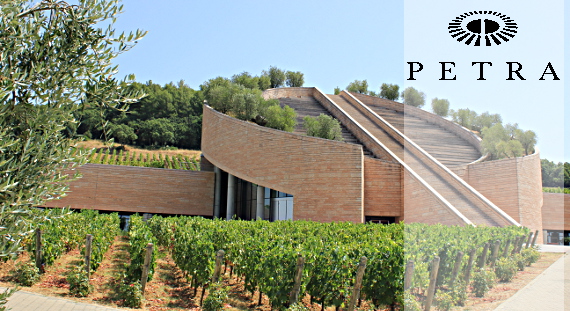 Near Suvereto in the Tuscan Maremma lies the winery Petra, which is one of several estates of Vittorio Moretti. The visitor's view of the circular building, which is characterised by a simple formal language and strict geometry, catches the eye from afar. Due to the bright red stones and the location on the slope, it blends harmoniously into the landscape. Red wines such as Ebo Val di Cornia DOC or Zingari Tuscany IGT are produced here.

In addition to the Petra estate, which includes 300 hectares of vineyards, olive groves and forests, Vittorio Moretti owns other vineyards, including Bellavista in Franciacorta, L' Albereta and Tenuta La Badiola. Moretti is also known for the production of sparkling wines. With his company group of the same name, he is also active not only in the wine industry, but also in the construction industry. He combines his two interests in the Petra project.

Petra as a symbol of commitment, passion and experience

Moretti has his daughter Francesca, who is responsible for the company's pilot plants, management of the vineyards and classic bottle fermentation, at his side for his project.
Since 1997 she has been in charge of the Petra project and works on the internal classification and development of the wines. In addition, the Morettis are supported by other experts: Prof. Attilio Scienza - the expert in layer classification and Swiss architect Mario Botta. Botta has won important international awards for his projects - from residential buildings to churches and museums. Its monumental building, reminiscent of the San Francisco Museum of Modern Art, makes the winery an architectural feature. Similar to a temple of an earlier civilization, it reflects elements of Greek, Etruscan and Roman wine culture. Petra is a place of storage, transformation, hospitality and exchange of experiences. The generously built building offers a lot of space as well as an optimal combination of environmental relation, working and living conditions and experience orientation. The building also symbolizes commitment and passion.
Moretti's general aim is to preserve tradition and to highlight beauty. To achieve his goal, he is working on measures such as investing in research and supporting cultural projects in the region.

The Petra Winery offers you the following wines:

Landscape beauty in the surroundings of Petra

Not only the vineyard, but also the landscape in central Italy is worth a visit. The area between the coast on the Tyrrhenian Sea and the Maremma hills has a rural character. Maremma is the region of central Italy, which in a broader sense includes southern Tuscany and northern Lazio. The name derives from the terms Maritima Regio and marisma (= marshy coastal country), where cork oaks, olive trees and other Mediterranean vegetation define the landscape.
The region is also rich in traditions and history, as evidenced by the archaeological finds, including wine amphorae. Tourism, agriculture and wine production are among the most important economic sectors.