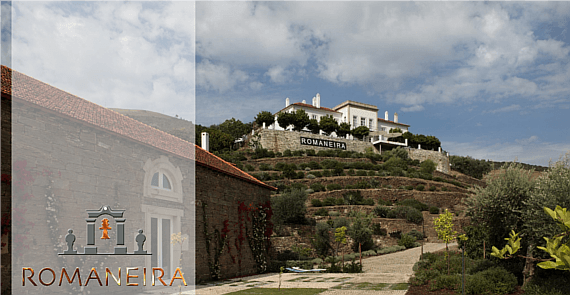 Quinta da Romaneira - Wine from the slopes of the Douro river

The Quinta da Romaneira is one of the most important and historically significant wineries in the Douro Valley. Above the "Royal River", the Douro, their terraced vineyards rise to over 85 hectares. These terraces were painstakingly carved into the slate cliffs centuries ago and have been the basis of a unique terroir ever since and ensure the consistently high quality of the award-winning wines of Quinta da Romaneira.

Mainly the "Portuguese clusters" Touriga Nacional are cultivated here, but Touriga Franca, Tinto Cão and Tinta Roriz and a few hectares of white grapes thrive there. The oldest written testimonies to the vineyard date back to the 17th and 18th centuries, and ever since then the vineyards have been cultivated and enlarged by changing owners. In the middle of the 19th century, Romaneira is listed as one of the first major quintas in Baron Joseph James Forrester's famous Douro map and in 1872, the Quinta da Romaneira Single Vintage Ports are among the first port wines to be auctioned off at Christie's. Finally, in the 1940s, the Monteiro de Barros family took over the estate and extended it to its present size.

Today, Quinta da Romaneira is firmly convinced that the magnificent vineyards produce not only exquisite vintage port, but also fine, powerful, unreinforced Douro wines. In the meantime, Douro red wines have become the winery's second most important business. In 2005, a new winery was also built for this purpose, which was optimally adapted to the prevailing conditions and where two-thirds of the wines can be stored underground in a cool place.