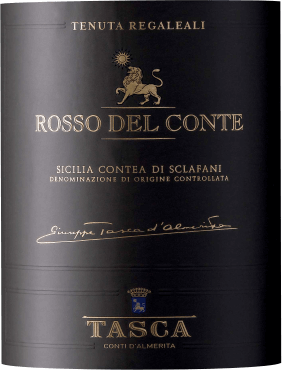 The Rosso Del Conte Contea Di Sclafani is a historical cru from the house of Tasca d' Almerita. In the ruby red glass, aromas of cherry, wild berries and nuts unfold on the nose, accompanied by hints of vanilla, cinnamon, tobacco and Mediterranean aromatic herbs. In the taste this red wine from Sicily presents an impressive concentration and elegance, on the palate with harmonious tannins and richness, the finish is long and persistent.

For this red cru, Nero d' Avola 54%, Perricone with 26% and 20% of other local red grape varieties growing on hillsides in the San Lucio vineyard are vinified together. The soils are clayey, fine and with slight proportions of limestone. The manual harvest begins with the Perricone at the end of September and ends with the Nero d' Avola at the end of October. The grapes are then vinified in classic red wine, fermentation and malolactic fermentation takes place at a controlled temperature in stainless steel tanks. The wine then matures for 18 months in 225-litre French oak barriques.

The Rosso del Conte was first produced in 1970 and was the first wine of its kind to present the potential of quality and life expectancy of Sicilian wines. Created by Conte Giuseppe, it expresses the characteristics of the Regaleali estate and is an example of continuous development. The two main grape varieties, Perricone and Nero d' Avola, grown in the San Lucio vineyard, became the first Cru wine from the Vigna Unica vineyard in Sicily.
The first wines until 1987 were aged in chestnut barrels, followed by large barrels of Slavonic grape oak and, from 1991, tonneau and barrique of French grape oak.