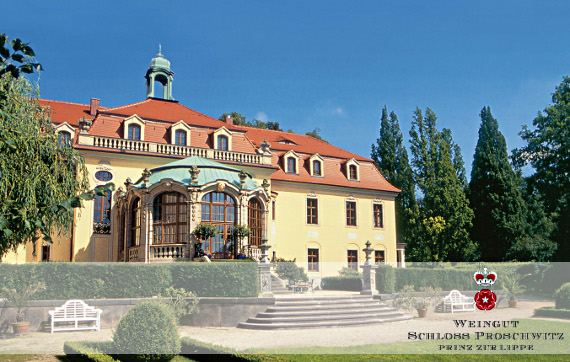 The Proschwitz Castle Winery was bought in 1997 by Dr. Georg Prinz zur Lippe and is the largest private winery in East Germany and the oldest still existing in Saxony. In the Proschwitz Castle, the largest single vineyard in Saxony, and the Heilig Kreuz Monastery, the vines are exposed to the continental climate with an annual number of hours of sunshine of 1800 and can produce full, aromatic fruit.

The microbiologist Christoph Reiner plans and organises the cultivation of vines for the Schloss Proschwitz vineyard, ensuring consistently high quality. Like his colleague, cellar master Jacques du Preez, he attaches great importance to minimising the impact on the wine. The 90 hectares of vineyards are controlled and organically cultivated and thus kept in balance. The Schloss Proschwitz Winery enjoys a high reputation both regionally and on a national and international level. In addition to the sympathetic owner of the winery, who invested a large part of his private fortune in the winery instead of making financial demands on the state, this is of course due to the wines of the highest quality, which are produced here in Germany's smallest wine-growing region.