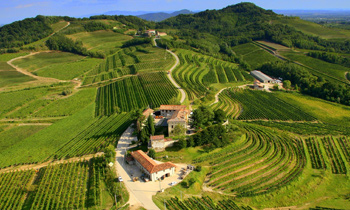 The history of the Torre Rosazza winery goes back to the time of the Romans, who planted their first vines and harvested wine in the region around Oleis. As they realised, the terroir was very well suited for viticulture here in the eastern hills of Friuli. That is why in the following years, efforts were made to preserve the tradition of this craft. The Benedictine monks of the Abtai of Rosazzo played an important role.

A heavy frost at the beginning of the last century led to the fact that agriculture, which until then had mainly benefited from the olives of the region, concentrated on the new cultivation of vines. The cultivation of and trade in wines from Friuli Venezia Giulia began to flourish.

In 1979 Torre Rosazza was taken over by Genagricola. The company began by investigating the quality of the soils and purchased plots of land that were ideal for Torre Rosazza's vines in terms of orientation and geological features. The investments were worthwhile: today Torre Rosazza is convinced by wines such as the fresh Friulano 2014 white wine or the Pinot Grigio D. O. C. Colli Orientali del Friuli 2013, with the winery's oenologist Luca Zuccarello, assisted by the dedicated cellar master Enrico Raddi.