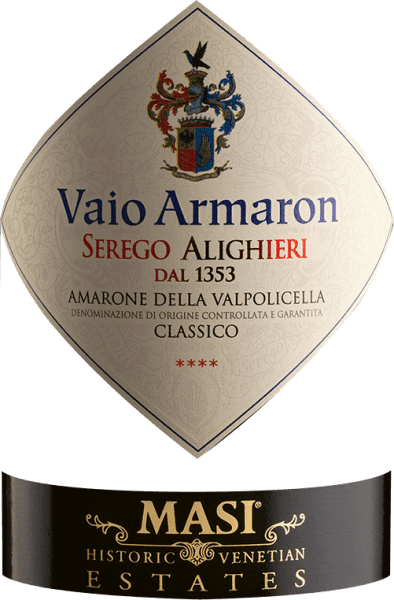 The Vaio Armaron Amarone delle Valpolicella Classico from the pen of Serego Alighieri from Veneto shows a dense ruby red colour in the glass. Held at a slight slant, the Burgundy goblet reveals a charming garnet red tone at the edges. The bouquet of this red wine from Veneto enchants with nuances of prunes, morello cherry, dried fruit and raisins. Let's continue to explore the aromas, and, encouraged by the influence of oak, we find the biggest hazelnut, walnut and cinnamon.

This red wine from Serego Alighieri is the right drop for all wine drinkers who like as little residual sugar in their wine as possible. However, it is never sparse or brittle, as is appropriate for a wine of this reputation. On the palate, the texture of this powerful red wine is wonderfully dense. Due to the balanced fruit acidity, the Vaio Armaron Amarone delle Valpolicella Classico flatters with a soft mouthfeel, without missing juicy liveliness. Finally, the finale of this red wine from the Veneto wine growing region inspires with remarkable reverberation.

Basis for the powerful Vaio Armaron Amarone delle Valpolicella Classico from Veneto are grapes from the vine varieties Corvina, Molinara and Rondinella. After the manual harvest the grapes reach the winery as quickly as possible. Here they are selected and carefully ground. Fermentation then takes place in large wood at controlled temperatures. The fermentation is followed by a maturation of 40 months in Slavonian oak barrels.

This Italian red wine is best enjoyed at a temperature of 15 - 18°C. It goes perfectly with lamb stew with chickpeas and dried figs, boeuf bourguignon or vegetable couscous with beef burgers.

In addition to an iconic wine reputation, this red wine from Serego Alighieri also has numerous awards and top ratings beyond 90 points. In detail these are