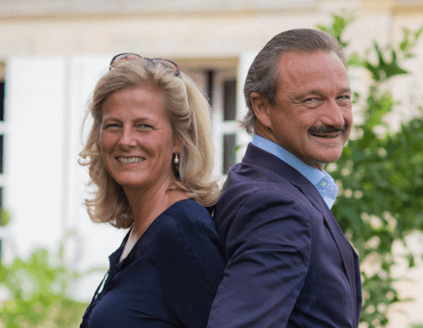 Wines of the nobility

The von Neippberg family has been involved in winegrowing since the 13th century. The ancestral seat of the family lies in northern Württemberg around the town of Schwaigern. Even then, the vine was a central element of the family's activities, which has been preserved until today. While the family still cultivates their vineyards around their place of origin, they gradually acquired vineyards in Saint-Émilion in the 1970s.

Stephan-Christoph von Neippberg and his wife Sigweis now cultivate the land that his father brought into the family. From the very beginning, he began to orientate his viticulture with respect for the terroir and the surrounding nature, at a time when this was not yet a matter of course.

In 1985 Christoph took over the management and built up the reputation of the estate. The exploration of new terroirs was also important to him. Thus, with time, Château d'Alguilhe and Clos Marsalette were added. In addition, he brought wineries into the family that were not located in the Saint-Émilion region, or even France. Thus Château Giraud in Bordeaux, Capaia in South Africa and Bessa Valley in Bulgaria are part of the Vignobles Comtes by Neippberg.

Respect for land and grapes

Due to their many different vineyards and terroirs, the Vignobles Comtes von Neippberg offer a broad portfolio that has something for everyone. The ecological idea, which has been consistently pursued by the Neippbergs since 1988, has been rewarded in 2014 with the organic certification of Château Canon de Gaffelière and La Mondotte.

In the cellar, the grapes are processed extremely carefully. Fermentation is temperature-controlled in large wooden vats. To ensure a good aroma, a pneumatic pigeage has been used since 1997, which regularly submerges the cap of the marc and thus fully exploits the potential of the grapes. The maturation takes place in barriques, separated by parcel. On average, the wines are aged for 18 months.