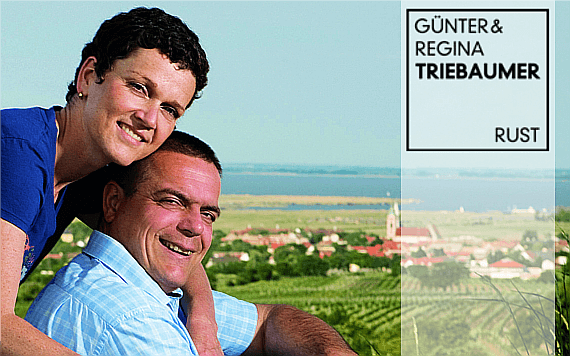 A couple - rich in experience

For centuries, the name Triebaumer Rust has stood for viticulture on Lake Neusiedl. The family has been based in Rust since 1691. However, Günter Triebaumer and Regina Limbeck go their own very modern way with their business, building on the traditions of a long-established wine-growing family. Their credo is: Always look into the world openly, always keep moving. Günter Triebaumer and Regina Limbeck have found each other for life - and for wine.

The vineyards - Rust at Lake Neusiedl

The winery is situated in an area with a special history. In 1681, the then Rust market acquired the rights and privileges of a free city from the Hungarian crown. This status had to be paid for 60,000 guilders in gold and about 30,000 litres of the best Rust eruption, which corresponded to ten average annual harvests. An inconceivable sum. Rust was a rich city and it owes this to its liquid, noble and sweet gold - the Rust eruption - the large water surface of Lake Neusiedl, the shape of the Rust Hills and the special interplay of sun and moisture provide for a unique microclimate in Rust. Günter Triebaumer and Regina Limbeck take the history of the city, its locations and its unique surroundings as a yardstick and transform them into well-structured wines full of character and typical of Burgenland. They are represented with 20 hectares in the best locations of the Freistadt Rust. Their vineyards are easy to spot: Lots of leaf mass with aerated grape zone. In winter and spring you can see the short pruning on site. Depending on the vigour of each vine, a reasonable number of grapes is decided upon. Exactly in this point, a winegrower's grounding and understanding of nature is best demonstrated.

No sex for butterflies - Triebaumer Winery

Günther and Regina Triebaumer work with the ground and not against it. This means that no herbicides are used and no unnecessary cosmetic treatments are performed. During the flowering period in May/June, the undergrowth is kept very short and after that the one or other plant may grow out of protection against erosion. Since the early 1970s, the use of mineral fertilizers has also been avoided. Instead, all residues from leaf cultivation, pruning and grape processing are returned to the vineyards as compost. The grape moth, who particularly likes to eat Blaufränkisch flowers or berries in its caterpillar phase, is hostile to lust as part of the Ruster Pheromon project. No sex for butterflies "has largely eliminated the winder by means of a confusing tactic. In the vineyards, small dispensers are hung up with the female sex hormone that continuously releases these fragrances. The confused males can no longer locate their potential partners and therefore cannot fertilise them.