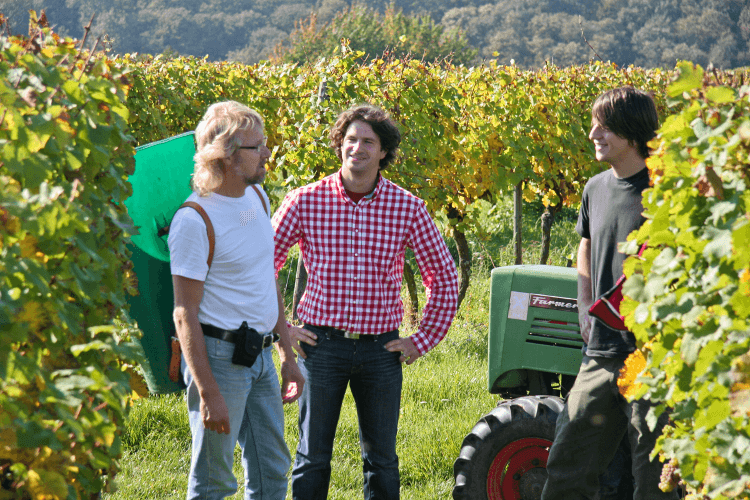 The Trenz Winery can look back on a long history that goes back 105 years, when the Spätlese was discovered in the Rheingau, or more precisely in Johannisberg, in 1775. More than 230 years later, Trenz is one of the greats in the Rheingau region and was voted "Discovery of the Year" by the Gault Millau Wine Guide in 2008.

The secret of Trenz Winery's success

The success of the Trenz winery is not only based on excellent work in the vineyard and cellar, but also on old vines that make more complex wines possible. Extract and must weight are also increased by very limited yields. The final silt is obtained by a late and selective hand harvest and careful pressing of the grapes.

Since 2002 the Trenz Winery has been cultivating two hectares of vineyards in Stellenbosch, South Africa under the name "TRENZ 2two". Wines from the Shiraz, Merlot, Cabernet Sauvignon and Cabernet Franc grape varieties are vinified here and aged in barriques to produce strong, spicy red wine cuveés.

Commitment and passion have found recognition. In 2008, the Trenz estate was awarded with 2 grapes by Gaut Millau as the discovery of the year.

The innovations go further: since November 2016, the Trenz Winery has been producing a handmade Riesling GIN in cooperation with the Birkenhof Brennerei from the Westerwald.

And if you have the desire to own and cultivate a vine, to harvest the grapes and to drink your own wine, you can become a hobby winegrower in the Trenz winery via a vineyard leasehold.

Successes of the Trenz Winery in Johannisberg